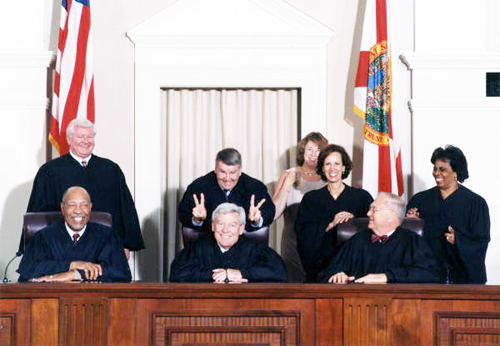 Recently, I was asked to make a short presentation to a group of economists and Christians (not everyone was both) on the errors of libertarianism from a free liberal perspective. Under the heading, “Whose Law Goes?” — an intentional double entendre, the presentation was to answer the related questions of whose perspective should be enshrined in law and whose perspective actually is enshrined in law currently. It may be easier to answer the second question of whose paradigms are actually in effect than to suggest the better alternative, but I think both questions are rather hard and for the same reasons, which is what this essay (and my new weblog) is about.

Simply put, there are three major stumbling blocks when attempting such a problem:

The first is a problem of being able to fully describe a vision. Consider the difficulty in selecting a particular variation of a general idea, say Thomas Jefferson’s vision of Classical Liberalism versus “Classical Liberalism” as an article on Wikipedia. It seems clear that the Wikipedia entry, no matter how well written, would fail to capture each Classical Liberal thinker’s way of thinking in its entirety and thus there is inherent conflict between different Classical Liberal versions. Even if one were to boil the matter down to a few key principles, extrapolating from these to a complete vision of society is an exercise that is bound to lead to weak predictions — Imagine some ideologue looking over God’s shoulder as the Divine implements this man’s vision thru the turning of a couple of wheels on a control panel. As the flow of history emerged from the machine, we see the man shouting, “NO! I meant JUSTICE!” God bemusedly says, “This IS your vision!”

The second difficulty is in having a vision of our own perspective, but then using that vision to distinguish elements of our vision from alternative visions that we might enjoy. How do we see ourselves, but with our own eyes? Considering again the man who gets to advise God about the rules of the world, we see that the man’s definition of “Justice” is part of a paradigm that motivates choices and political opinions, but it also determines the interpretation of causes and effects. Other people are modeled as either being a part of this “Justice”, opposed to it, or simply amoral, but nonetheless a conception of justice suggests particulars about how the world works — to be just or not, something must at least be practically accomplished, otherwise justice could never be achieved. A failure to do what is just, is to choose wrongly, which implies that the choice is available. How do we separate our interpretational methods from our priors? I believe that we can only get outside ourselves by relying on the insights we derive from talking to others, but this way of operating must come into conflict with any kind of clear vision of a definable perspective, which is again the first problem.

The third problem is closely related to the first two, but has enough difference to shine further light upon the dualistic nature of identifying and implementing (or purging) paradigms. How do we separate the values we want to see in the world from the structure of society itself? If we think of it as functional, where there is some function for social change to which we can send parameters of values and social structures, how do we characterize these values and social structures? If we are talking about “Liberty”, are we talking about the freedom of choice of the social change function — that it can choose a variety of answers given different inputs? Or could “Liberty” be a value injected into any society that would draw attention to itself? Or is “Liberty” an underlying structure of society? I think it is all of these and that it cannot be pulled apart.

Is it delusional to believe that we can identify our exact perspectives, separate from those that we constantly interact with, in a way that allows us to easily toss out parts of society and replace them with our own principles? I don’t believe that we should hide from the question of “Whose Law Goes?” We will need better paradigmatic tools that will aid us in our journey ahead.

Kevin Rollins is the founder and editor of Free Liberal and principal of Kevin Rollins Consulting. He was formerly the managing editor of Econ Journal Watch. He holds a master’s in economics from George Mason University.

As a libertarian I see a problem with this perspective. This would be the very premise of the question.

I am opposed to any rule over another. So any ‘law’ really is what I oppose. That is not to say I oppose order. Order is found through many means and not all will be the same.

“Whose Law Goes?” None. No law, No State, no power over one another.

The concept that there is one law all abide by is very much what many libertarians like myself oppose.

This is the key question in the social sciences and how you answer it depends on which way of life you find yourself in or chose for yourself. The Cultural Theory of Mary Douglass and Aaron Wildavsky is a good way to put these questions in perspective. In this theory, there are four or more ways of life which depend on our group connectedness and the extent to which we are bound by rules and roles. In an updated formulation by Dennis Coyle, the four ways of life are Hierarchy, Egalitarianism, Despotism and Libertarianism. Hierarchists are high group/high rule, Libertarians are low group/low rule, egalitarians are high group/low rule and despotists are low group/high rule.

Where you stand depends on where you sit. Hierarchs have a process with people at the top making the decisions. Egalitarians must come to concensus unless they have a charismatic leader to inspire agreement. Libertarians buy agreement while Despots impose rules arbitrarily and can rely on externals to back them up (the will of God(s) or the State).

PunkJohnnyCash gives a particularly libertarian response, but everyone is not a libertarian.