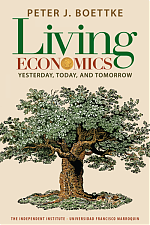 Peter Boettke’s Living Economics gets off to an inauspicious start. Although the book’s principal plea is for people to “live” economics passionately, it begins with a rhetorical assault on one of the greatest and most passionate practitioners of economics in the history of the science, John Maynard Keynes.

To the average economist or economics student, Boettke seems to be sending mixed signals from the outset. Are we supposed to be “living economics” or policing ourselves for any traces of Keynesianism—or “mainstream economics”, or “market failure”, etc.?

Of course the average economist is probably not Boettke’s target audience. For most of Boettke’s readers the introductory salvo against Keynes will not be surprising, nor even problematic. It’s precisely because few of his likely readers will sense any mixed signals at all that I think these tensions in the book are important for me to highlight.

Many of the principal characters in Boettke’s drama are major figures in economics. But others, like Sennholz, Lavoie, and Berger—even Tullock or Kirzner in some circles—are less well known.

Murray Rothbard is generally a familiar face, but people typically caricature him as a boisterous movement libertarian. In contrast, Boettke’s Rothbard is a careful analyst of socialism in theory and in practice (Chapter 6).

One of my favorite chapters discusses the work of the sociologist Peter Berger (Chapter 13). Well known among sociologists, Berger’s work on social construction would be dismissed by many buttoned-down economists, skeptical of anything that smacked of postmodernism.

But when Don Lavoie, a methodologist with strong postmodernist leanings, is your dissertation advisor, Berger’s contribution is not so easily dismissed and its relevance to the subjectivist tradition in economics is more obvious. Chapter 12 reflects on Lavoie, although it does not make any explicit connection between Lavoie and Boettke’s appreciation of Berger.

The very best practitioners of the science who are known by all (e.g., Buchanan, Hayek, Ostrom) are presented in a fresh way thanks to Boettke’s close personal or professional connections.

Nevertheless, the book is peppered with head-scratchers that I worry are liable to confuse students that pick it up.

Contrary to Boettke, Keynes did not think we live in conditions of post-scarcity (p. 2; 12). Boettke tries to paint with broad strokes in this discussion, repeating Frank Knight’s attack that Keynes carried economic thinking back to the dark ages, but he does not even discuss Keynes’s detailed criticisms of and differentiation of himself from earlier underconsumptionist and post-scarcity theorists. The General Theory acknowledged these theorists as early contributors to the literature on effective demand, but it unambiguously dismissed them as viable explanations of economic downturns.

Likewise at odds with Boettke’s account, Thomas Malthus did think the economy had equilibrating tendencies (p. 364 in Boettke, see the extended discussion of gluts in Malthus’s Principles for his thinking on equilibrating tendencies). And David Ricardo presented a stark alternative to Smithian trade theory, contrary to Boettke’s opposite claim (p. 339). Smithian trade theory was largely lost until it was re-popularized by Paul Krugman in the 1970s. Krugman, of course, is (along with Keynes and Malthus) a frequent whipping boy in the George Mason University brand of economics.

The discussion offers some minor frustrations, proportional to those discussed above. For instance:

But these quibbles pale in comparison to the spectacular central claim that Hayekian macroeconomics (due to its rejection of a certain sort of formalism) is more open to testing against the real world than either New Classical or New Keynesian models.

This is all in stark contrast with New Classical and New Keynesian macroeconomics, which have continuously evolved in response to an enormous empirical literature testing both their assumptions and predictions. Indeed, the cutting edge New Classical and New Keynesian models have become increasingly similar over time precisely because of the premium that both place on testing theory against the real world. The reality here is exactly the opposite of what Boettke suggests.

These were genuine disappointments, given the author’s background in the history of economic thought. What’s worse is that the mistakes are not randomly distributed. They systematically paint a picture favorable to the George Mason University way of doing economics and the suite of thinkers that Boettke values, and unfavorable to any whiff or hint of Keynesianism.

From a free liberal perspective, the major weakness of Living Economics is that despite the breadth of thinkers presented, Boettke treats his approach to economics as the standard for “good economics”.

Simply having an opinion on economics is not a problem, of course. But you will not find the pluralism of Deirdre McCloskey, Kenneth Boulding, and many other students of the history of economic thought who are brimming with praise for both Smith and Keynes or Malthus and Ricardo alike.

Credulous readers of Boettke are likely to walk away with the impression that a “Smithian Keynesian” is an oxymoron. Such credulous readers will find themselves woefully unprepared for real world interactions with economists outside the George Mason University orbit.

Rather than engage those who see things differently as scientists, Boettke unfortunately chooses to brands their views as “dogma” (p. 304) or a “disease on the body politic” (p. 12). This is not just my interpretation. A more sympathetic David Gordon, in his review of the book, describes Boettke as waging “a battle” against “false doctrine”, a doctrine that is promoted in a “quest” for a “false god”.

It’s little wonder that Boettke occasionally feels that his perspective on economics is marginalized! Who would want to talk economics with someone that’s going to call them a dogmatist or wage a battle against them, and then present said battle to students as good economics?

Needless to say, I find it difficult to offer an entirely glowing review of the book.

Perhaps that’s alright. Living Economics has received plenty of glowing reviews to date. Perhaps a critical review or two is of value before a broader audience takes the book up and inevitably shares my disappointment.

After all, Living Economics is burgeoning with excellent history of economic thought and ought to be read for that reason alone if for no other.

Many of the chapters are completely free of the excesses criticized above. It would be a genuine shame for readers to take in the first chapter and then put the book down as a muddled polemic.

For the most part, we economists are not dogmatists, we do not see ourselves as high priests, and we are generally humble scientists. I consider it unfortunate that Boettke promotes another view of our profession.

But as Boettke writes, “we read one another not to indict each other, but to learn from each other” (p. 174). There is indeed much to learn from Living Economics if you can overlook the mixed signals and hostilities.

Daniel is a doctoral student in American University’s Department of Economics and a research associate at Urban Institute. His blog is Facts and Other Stubborn Things