Occasionally Kevin Rollins and I catch up with one another with a phone conversation. We met originally in my home area of Asheville, NC, around the turn of the century. We became friends and have remained so over the several years now. 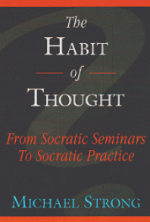 In the summer of 2012, in a phone conversation, we rambled into a discussion of problems of economics and education in America. Kevin was quite excited about a book that he had just finished reading, The Habit of Thought: From Socratic Seminars to Socratic Practice, by Michael Strong.

Reading a book about educational techniques had become foreign to me. There had been a long interlude. I trudged through the beginning of the preface wondering if I would make it through. And then, still in the preface, a light bulb appeared. Mimetic teaching and transformational teaching methods were defined and reviewed. This was an epiphany for me. Within it was a primary reason I left teaching in public schools.

My teaching experiences were moderately good. Once I remember teaching a poem now forgotten. Quite honestly, I struggled with it. I was under a deadline to keep the specified curriculum going and on schedule. My lesson was planned and then presented and discussed. In the discussion one male student suggested a different take on the poem. The moment he finished his ideas on the poem, I knew that he had hit a home run. It made total sense. I immediately congratulated him, “Your ideas about this poem are better than the ones I just presented”.

The most shocking thing that happened to me as a first-year teacher was the unpleasant discovery that many, perhaps most, students had no interest in learning. How could that be? What is negative about learning? It is unnatural for a human being to prefer not knowing to knowing.

Another school experience worthy of note here was unrelated to curriculum. Something happened at the school that brought about a new rule change. The high school students assembled in the auditorium for a review by the principal. Afterwards there were obvious murmurs of concern and dissatisfaction as the students filed back into their classrooms.

When the students were settled in my class, I informed them that I was throwing out the lesson plan for that day and presented them with an idea. “I want to know your thoughts about our assembly today. I do not want to influence your thoughts. I am not going to respond to your thoughts. I just want to know them and think about them”. It was an interesting day and one of the most curious things was that some students were perplexed and even a bit angry that I did not respond to their thoughts. Little did I know that I was on the edge of transformational teaching.

The issue that turns everything on its head is the relationship of knowing the facts to doubting the facts.

All schools in this era teach facts as facts. All a student has to do is figure out the answers the teacher wants and…Bingo! The student just won the grand prize—an A on a “report card”. Most homeschooling parents teach to “facts”. In many states, homeschooled children have to measure up at the end of a school year to the same “facts”.

This sets up a pattern that yields unhappy students preferring no learning to learning. That is not a good result.

The school boards and district managements are evaluated by their respective state boards of education and/or departments of education.

State departments of education that accept US Department of Education funds are tied to standards of the “facts”.

Various problems are created by this situation.

Problem One: A hierarchy exists—a chain of command. Our central government has become the supreme authority of what is taught as fact. Unfortunately, government at all levels is political. An educational outcome is to be preferred, not a political one.

Problem Two: The hierarchy described above develops a mindset on all levels: All that matters is the final authority. This mindset carries over to everything and extends through a lifetime. Instead of students, teachers, citizens etc. evaluating the merits of “facts”, they simply search out the highest authority and accept that as a concrete, absolute, undeniable truth. Consider how dangerous this is in the hands of evil “higher authorities”.

Finally, let us say that there is indeed a need for facts in a complicated modern world. But this modern world changes and the way it is perceived changes. When a student is taught that a particular idea is incontrovertible, that student later-to-be adult is squeezed into an uncomfortable anti-intellectual position.

The kid who learned that Pluto is a planet got an A on his/her report card (between 1930 and 2006) and damn it, Pluto is a planet. It officially is no longer established as such. The mimetic student cannot fathom the idea of intellectual controversy. “Everything is established and if you disrupt that order, you undermine my world”.

How wonderful it could have been if someone had taught this subject with the Socratic Method. The Socratic student would have been thrilled to find out all the new information, controversies, and ideas swirling around Pluto. He/she would anxiously be awaiting the news from NASA’s upcoming spaceship pass in July, 2015.

It is better to grow rather than to “know” and if that is true, let’s convey it to our upcoming generations.

There will be one or more follow-ups to this article in the near future.